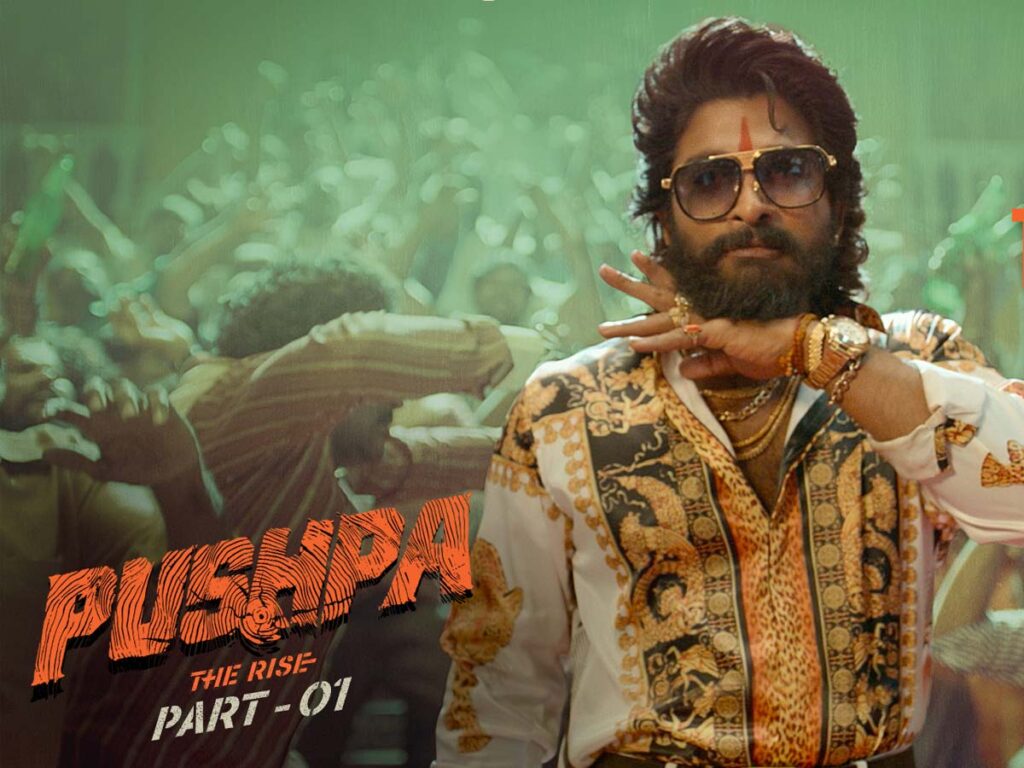 Allu Arjun Story of Pushpa Raj, a lorry driver in the Seshachalam forests of South India, is set against the backdrop of red sandalwood smuggling. Red Sandalwood is endemic to the South-Eastern Ghats (mountain range) of India.

Sukumar’s Pushpa: The Rise – Part 01 is a 2021 Indian Telugu-language action drama film[5]. It is produced by Mythri Movie Makers in collaboration with Muttamsetty Media and stars Allu Arjun as the titular character, Fahadh Faasil (in his Telugu debut), and Rashmika Mandanna, with Jagadeesh Prathap Bandari, Sunil, Rao Ramesh, Dhananjaya, Anasuya Bharadwaj, Ajay, and Ajay Ghosh playing supporting roles. The film depicts the rise of a coolie in the smuggling syndicate of red sanders, a rare wood that grows only in the Andhra Pradesh state’s Seshachalam Hills.

The Hindi-dubbed version of Pushpa: The Rise Friday crossed the Rs 75 crore mark at the box office on Friday and is expected to do so on Saturday.

Pushpa: The Rise was supposed to be released on Christmas, but the date was pushed forward to avoid a clash with Ranveer Singh’s next film, 83. Despite receiving mixed reviews from critics and audiences, Pushpa: The Rise has performed well at the global box office.

On Friday, the Hindi-dubbed version of Pushpa: The Rise earned Rs 1.95 crore. So far, this version of the film has grossed Rs 74.44 crore at the Indian box office. According to box office analyst Taran Adarsh, the fact that there were no new releases in theatres this week aided Pushpa: The Rise. He went on to say that the film is “unstoppable” in Maharashtra and Gujarat, particularly in Tier 2 and Tier 3 cities.

On its opening day, Pushpa: The Rise netted ₹44 crores in India with a gross of around ₹51 crores and set a post-pandemic record for day one. Including the premieres, the film grossed $850,000 in the United States and obtained a worldwide gross of ₹74 crores on its first day. Pushpa grossed over ₹159 crores worldwide in its opening weekend. It netted over ₹107.5 crores in three days, making it the first ₹100 crore weekend in India post-COVID-19 pandemic. Overall, it’s the 13th film and fourth South India film to achieve this feat. Box Office India reported that the opening would have been higher, if not for the ticket pricing issue in Andhra Pradesh state.

The Indian Express examined The Rise’s losses as a result of low ticket prices in Andhra. “Pushpa earned a [distributor’s] cut of nearly 13 crores from the state’s 1100 screens. To put this in context, Pushpa’s first-day share in Telangana was over 11 crore from around 600-odd screens “as stated in the article

The Hindi dubbed version of the film is a commercial success.

The Hindi version of The Rise earned 26.50 crores in its first week and more than 62 crores by the end of the third weekend. The Rise grossed over 200 crores in India in two weeks, making it the seventh South Indian film and the second Allu Arjun film to do so after Ala Vaikunthapurramuloo (2020). The film grossed $300 million worldwide from all versions by the end of the third weekend and emerged as the highest-grossing Indian film in 2021.

An open field [no new release] is allowing #Pushpa to continue his dream run… These two markets, #Maharashtra and #Gujarat are unstoppable, particularly in Tier-2 and Tier-3 centers… (Week 4) 1.95 cr. on Friday Total: 74.44 crores #PushpaHindi pic.twitter.com/QxFnBRYv5v

About Pushpa : The Rise

The film Pushpa: The Rise is the first in a two-part series. The plot of the film is based on the smuggling of red sanders in the Rayalaseema region of Andhra Pradesh’s Seshachalam Hills.

Sukumar is the writer and director of action-drama film. Mythri Movie Makers in collaboration with Muttamsetty Media produced the film. It stars Allu Arjun in his Telugu debut as the titular character, alongside Rashmika Mandanna and Fahadh Faasil.

On December 17, Pushpa: The Rise was released. Pushpa The Rule, the second film in the series, is set to be released in theatres in 2022.