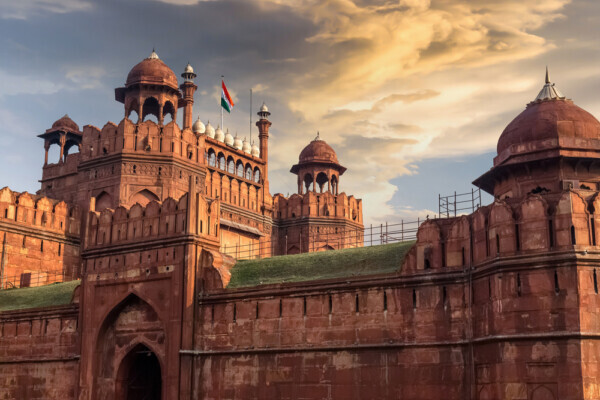 India is one of those destinations that everyone’s bucket list includes at some point. Here we are going to show the famous tourist place in India. They may fantasize about visiting Agra to see the Taj Mahal in all its splendor or exploring the royal palaces scattered throughout Rajasthan. Others are drawn to the breathtaking landscapes of Darjeeling and Rishikesh, as well as the postcard-perfect beaches of Goa.

There are also India’s major cities, such as New Delhi, Mumbai, and Kolkata, each with its own distinct personality. It’s impossible to get bored exploring India’s major cities temples, markets, and colorful streets. The most difficult aspect of traveling to India is deciding what to see and do. Below you will get to know about the list of tourist places in India or the famous tourist place in India.

Plan your adventure with this list of the best places to visit in India, whether you’re going on an epic backpacking trip or a luxurious vacation.

The Taj Mahal, an enormous mausoleum of white marble erected in Agra between 1631 and 1648 by the command of Mughal emperor Shah Jahan in memory of his favorite wife, is the gem of Muslim art in India and one of the world’s most recognized masterpieces. If there was only one emblem to represent all of India, it would be the Taj Mahal. Taj Mahal comes under top tourist place in India.

Every year, millions of tourists travel to Agra to view the monument, rising up before dawn to witness the beautiful building sparkle at sunrise. However, Agra leads the list of the finest places to visit in India for reasons other than India’s most recognized sight. Today, it is listed as one of the new Seven Wonders of the World.

The city in Uttar Pradesh is brimming with magnificent Mughal masterpieces, such as Itimad-ud-Tomb Daulah’s and Akbar’s Mausoleum, all of which are adorned with mesmerizing inlaid marble motifs from top to bottom. Tourists can also visit another UNESCO World Heritage Site, the Agra Fort. With so many treasures in one location, Agra is a must-see destination for travelers in India.

The Red Fort (Lal Qila) is a 1638 landmark that stands 33 meters (108 feet) above Old Delhi. Shah Jahan, the Mughal Emperor, erected it. The fort is situated in the heart of Delhi, India. Red Fort is the beauty of New Delhi and also the pride of India. On our Independence Day, the Prime Minister of India hoists the flag at Red Fort.

The Lotus Temple, India Gate, Humayun’s Tomb, and India’s tallest tower, Qutub Minar, are among the top tourist attractions in New Delhi. Spend your days touring these fascinating locations and refilling at street-side chai vendors and high-end eateries. Despite its throngs and turmoil, New Delhi has a lot to offer travelers. The vibrant Indian capital is the ideal blend of tradition and modernity. Old Delhi is home to some of the country’s most revered landmarks, including the Jama Masjid, Red Fort, and Chandni Chowk market district. However, travelers may visit a plethora of other spiritual and culturally significant locations around the huge metropolis.

Tourists, on the other hand, experience their own kind of spiritualism by enjoying morning boat rides, releasing flower blessings that float down the river, and witnessing the fire-filled Hindu chanting sessions from the steep ghats.

Away from the ocean, the ancient town’s streets twist and curve like an infinite maze. Legend has it that there is still no precise map of Varanasi, and after experiencing the labyrinthine city for yourself, you’ll believe it.

The word “Rajasthan” literally means “Land of Kings.” Rajasthan is mentioned for the first time in a stone inscription from 625 CE. The first recorded reference to the word Rajasthan comes in the 1829 publication Annals and Antiquities of Rajasthan or the Central and Western Rajpoot States of India, whereas George Thomas’s 1800 memoir Military Memories is the first documented record of Rajputana as a name for the area.

Rajasthan, which means “Land of Kings,” is brimming with relics of previous kings and queens. With its glistening palaces, towering forts, and vibrant festivals, this western state deserves to be the star of your India vacation.

One of the best sites to visit in Rajasthan is Jaipur, which is part of the Golden Triangle Tourist Circuit, which also includes Agra and New Delhi. It’s regarded as “India’s Paris” because of its distinctive pink architecture, magnificent City Palace, and a plethora of diamond stores.

With its golden sandstone castles and antique Havelis, Jaisalmer appears like something out of an Arabian Nights fairy tale come to reality (mansions). Rajasthan’s allure will enchant you no matter where you wind up in this desert state.

Rishikesh often spelled Hrishikesh, is a city in Uttarakhand, India, ruled by the Rishikesh Municipal Corporation (since October 2017) and a tehsil in the Dehradun district. It is renowned as the “Gateway to the Garhwal Himalayas” and the “Yoga Capital of the World” since it is located in the Himalayan foothills of northern India.

Since the late 1960s, when the Beatles visited Maharishi Mahesh Yogi’s ashram—now an abandoned facility that has become an off-the-beaten-path tourist destination for fans—Rishikesh has been on the radar for spiritually inclined tourists.

The town is located in the Himalayan foothills on the banks of the sacred Ganges River, and it is a popular destination for yoga and pilgrimages. Take part in the activity or simply enjoy the sounds of the temple bells and the views from Rishikesh’s two suspension bridges, which are frequently patrolled by aggressive monkey families. Maintain a safe distance.

Amritsar, known as the “Jewel of Punjab,” is known for its magnificent Golden Temple. The golden edifice, which glistens in the sun and reflects into the enormous pool that surrounds it, is one of the holiest locations in the world for Sikhs.

The site also has the world’s biggest communal kitchen, which feeds lentils and curries to 100,000 customers (including curious visitors!) every day.

Plan to spend an afternoon in Amritsar at the Pakistani border to witness the Beating Retreat Ceremony. Long-time adversaries India and Pakistan send goose-stepping guards to open and seal the border gates at dusk in an over-the-top ritual you’ll never forget. Arrive early to join the locals in the streets to dance to booming Bollywood music.

Goa is a state in western India with coastlines stretching along the Arabian Sea.

In Kerala, you’ll exchange beaches for quiet backwaters if you go south of Goa. Nothing compares to boarding a traditional thatched-top houseboat in Alleppey (also known as Alappuzha) and quietly drifting through palm-fringed lagoons and waterways, whether for a day excursion or an overnight expedition. On the water, you’ll be treated to freshly prepared Indian cuisine as well as stunningly magnificent natural scenery and fauna.

Kerala is a breath of fresh air after the heaviness of cities like New Delhi and Jaipur in the north. When you need a respite from the turmoil, set aside some time here.

Darjeeling is a Himalayan foothills town in India’s West Bengal state. It is still the terminal of the narrow-gauge Darjeeling Himalayan Railway, or “Toy Train,” which was inaugurated in 1881 and was formerly a summer getaway for the British Raj elite. The characteristic black tea cultivated on plantations that dot the surrounding mountains is famous. Mt. Kanchenjunga, one of the world’s tallest peaks, serves as the backdrop.

In India, it doesn’t get much better than what you’ll find in Darjeeling when it comes to sightseeing. The West Bengal hill region is known for its lush green tea plantations, breathtaking snow-capped peaks (including Khangchendzonga, the world’s third-highest summit), and peaceful Buddhist monasteries. This is the ideal location for a mountain walk or mountain bike excursion.

Taking a ride on the Darjeeling Himalayan Railway is one of the most popular things to do in Darjeeling. The 140-year-old “Toy Train,” which is powered by an antiquated steam engine, takes tourists on two-hour joy journeys from Darjeeling to Ghum—a journey that is consistently ranked as one of the most picturesque train rides in the world.

Shimla is the capital of Himachal Pradesh, a state in northern India located in the Himalayan foothills. It was once the summer capital of British India, and it is still the terminus of the Kalka-Shimla Railway, which was completed in 1903. The Mall, a pedestrian thoroughfare, is lined with handicraft shops, as well as the Lakkar Bazaar, a market specializing in wooden toys and crafts.

When the temperatures in New Delhi and other cities in North India reach dangerously high levels, visitors and locals alike go to the hill stations, the most prominent of which is Shimla. The cool breezes and wooded slopes provide a welcome respite from the heat, as well as a peaceful setting to spend a weekend or longer. The ambiance is just as nice in the mountainous center section of town, where driving is prohibited, as it is in the picturesque surroundings.

Make a reservation on the Kalka-Shimla Railway, a UNESCO World Heritage Site, while you’re in the region. The 96.6-kilometer railroad, which has been in operation for more than a century, is known for its breathtaking scenery and real vintage experience.

Kolkata (previously Calcutta) is India’s West Bengal state capital. It was India’s capital under the British Raj from 1773 to 1911, having been founded as an East India Company commercial center. Grand colonial buildings, art galleries, and cultural events are among the city’s many attractions today. Mother House, the headquarters of the Missionaries of Charity, was created by Mother Teresa, whose burial lies on the grounds.

Kolkata, India’s third-largest city, is a crumbling British-India masterpiece rich with colonial-era architecture. The Victoria Memorial, a white marble monument with a museum and hundreds of galleries, and Park Street, a popular street with stores and restaurants that bustle 24/7, especially during the holidays, are two of the top things to do in Kolkata.

Kolkata, on the other hand, is as much about the sights as it is about the feelings. This is a city that will elicit every single one of your emotions, with life’s highs and lows on display on every street. Prepare yourself and be receptive to the adventure.