Skip to content
Bollywood khalnayak Sanjay Dutt has announced that he is taking a leave from work for some medical treatment. He is suffering from lung cancer stage 3 and he will be flying to the US for the treatment. Komal Nahta film critics announced the news on Twitter. He tweeted Sanjay Dutt diagnosed with lung cancer. Let’s pray for his speedy recovery. 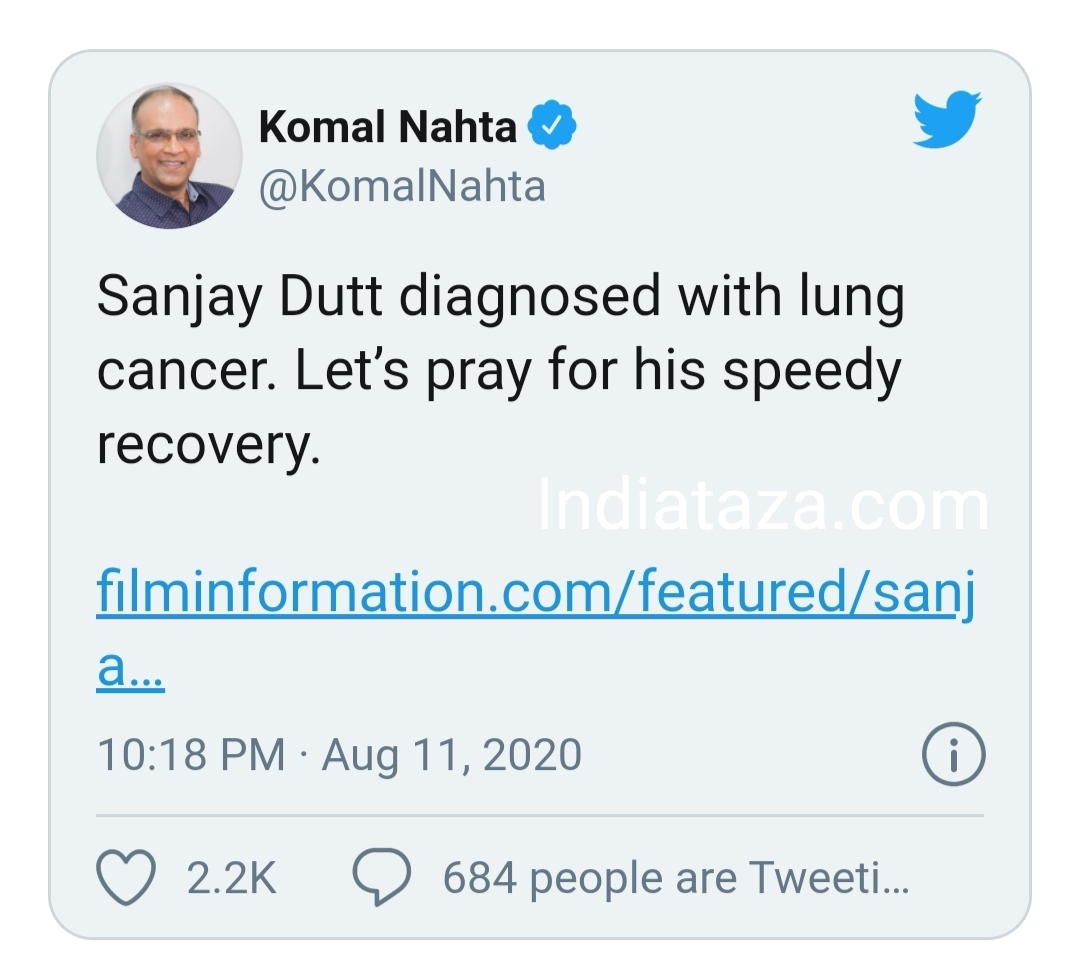 Sanjay Dutt’s close friend reveals that the actor has told a news portal that the actor is devastated and is worried about his little children who are currently in Dubai with their mother Maanayata Dutt. The friend also stated that cancer is very dangerous so need immediate treatment.
Today in this social media he announced that he is taking a leave from work for some medical treatment and will be back soon. His post is, ” Hi friends, I am taking a short break from work for medical treatment. My family and friends are with me and I urge my good wishers not to worry or unnecessarily speculate. With your love and good wishes, I will be back soon “! 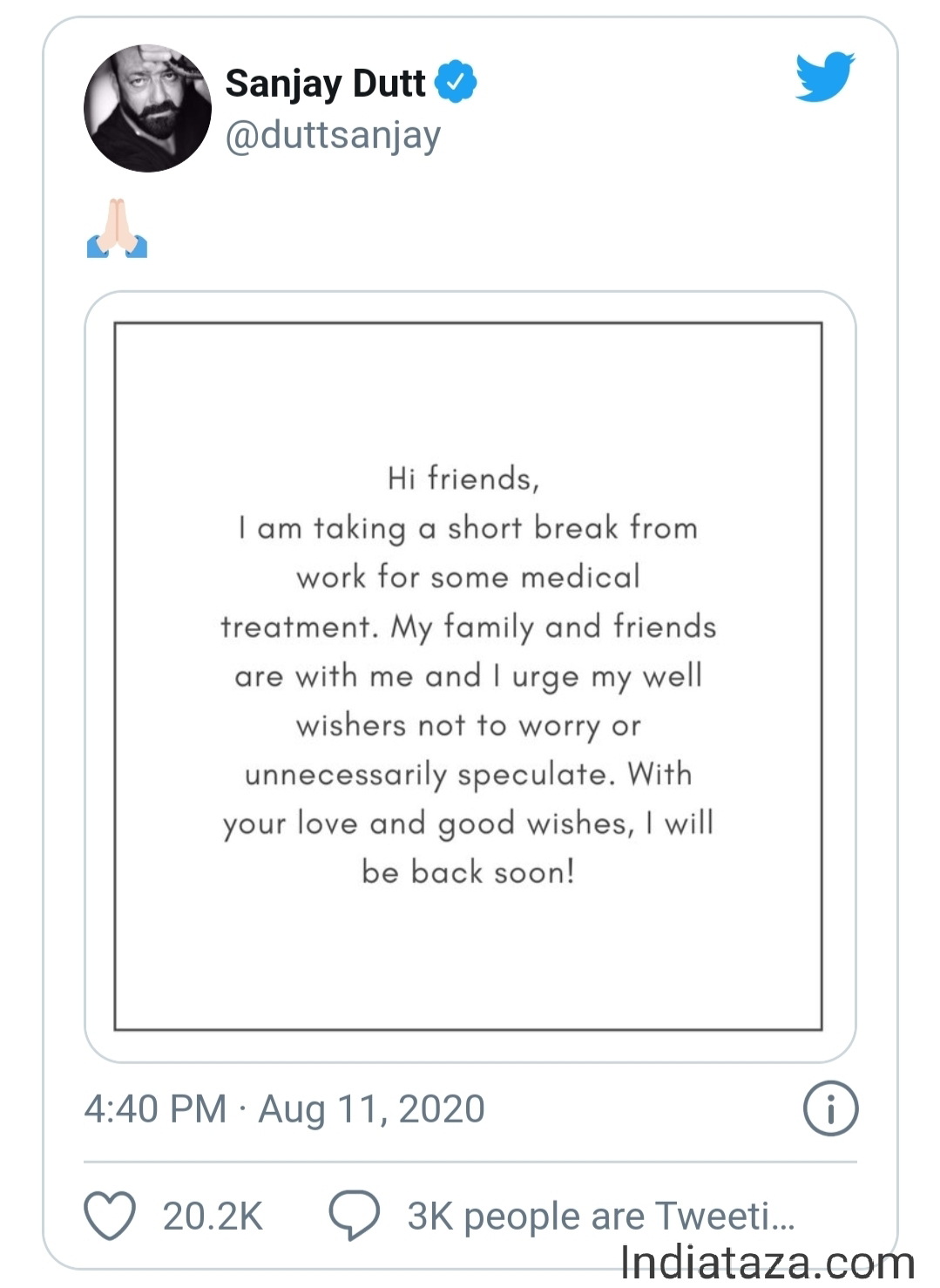 The Sadak 2 and KGF: Chapter 2 his upcoming movie which will now release on Disney + Hotstar.
Sanjay Dutt was admitted to the Lilavati hospital on 8th August after the complaint of breathlessness. Earlier it was a rumour that Sanjay Dutt is tested positive but after testing it seems that he is negative for Covid-19 and was discharged after two days on 10th August.
His Twitter post from the hospital, ” Just wanted to assure everyone that I am doing well. I am currently under medical observation and my Covid-19 report is negative. With the help and care of the doctors and nurses and staff at Lilavati hospital, I should be home in a day or two. Thank you for your good wishes and blessings”. 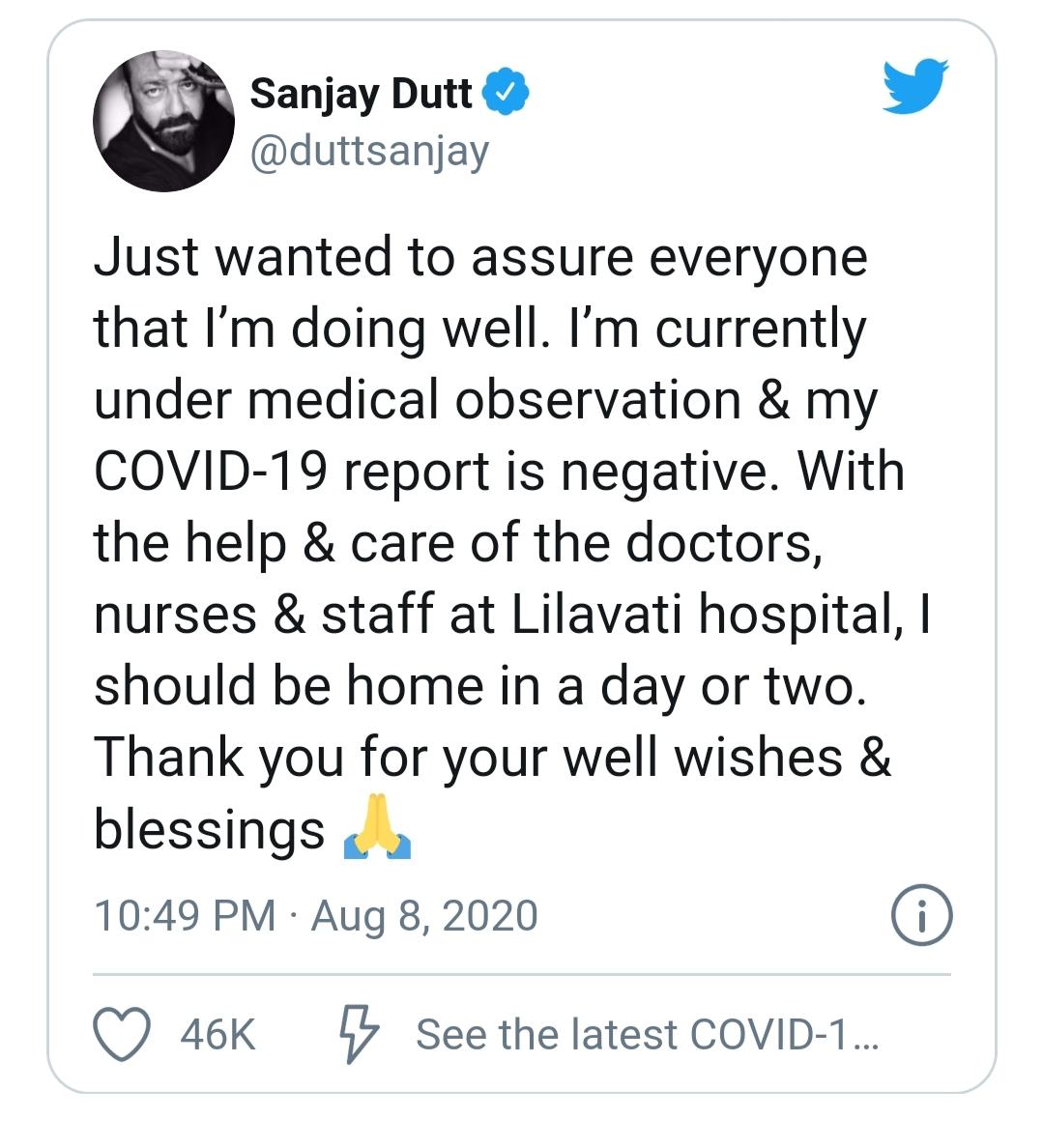 Dutt’s sister Priya Dutt told the news agency in a statement that he was admitted to Lilavati hospital around 4.30-5 pm for a regular check-up as he was feeling a little breathless. In the hospital, they did a COVID-19 test and the result was negative.  We have kept him in the hospital so that he gets all of his tests done. He has gone for a full check-up and I think he will come home on Monday.
On-screen, we will see Sanjay Dutt in his next upcoming films Sadak  2 and KGF Chapter 2.
Let’s pray for his speedy recovery!