By India TazaAugust 1, 2020Updated:December 29, 2022No Comments4 Mins Read
INDIA TAZA wishes you all a Happy Raksha Bandhan ♥️✨
Raksha Bandhan is a traditional popular Hindu festival celebrated in India, Nepal, and other parts of the subcontinent in India where people all over the world are influenced by our culture.
A man ties Rakhi with his sister, to have grown up together, and later when the sister marries it is the responsibility of the brother to be her main protector.
Law says after the death of the parents the brother’s home is only the possibility of temporary or long-term support in case of desertion or divorce or even widowhood. The Brother keeps the sisters smiling.
WHY WE CELEBRATE  Raksha Bandhan?
Or
Rakhi is a Hindu Festival

Raksha Bandhan is celebrated in Shravan month during a full moon or Purnima day, this year Raksha Bandhan is celebrated on 3rd August. Rakhi or Raksha Bandhan is a festival that celebrates the bond between brothers and sisters. Where sisters tie thread about their brother’s wrist as a symbol of their love in turn the brother pledges to protect his sister.
There are many mythological stories about how this custom came into being but here I will be saying two of the story.
1. Story of Krishna and Shishu Pai ( KRISHNA and DRAUPADI )
Once upon a time when Krishna visited his aunt Satyawati. Satyavati was having a baby boy his name was ‘Shishupal’. Shishupal was born with three eyes and Four Arms so his mom told Krishna I wish he could look attractive like you then after some time Krishna took the baby boy from the cradle and sat down with the baby boy in his lap at the exact moment the extra and arms left the body of Shishu Pal.
Krishna smiled, then the Satyavati told him with a heavenly voice it was Foretold or predicted that Shishupal would die one day in the hands of the person who held him in his lap.
So she cried and she made Krishna promise that he would pardon or forgive Shishupal ‘ a Hundred times ‘ before he kills him and Krishna agree with it then when Yudisthir decided to make the Rajasuya Yajna, ShishuPal insulted Krishna as a coward and worthless to be honored as a king, obviously then Krishna couldn’t bear more than a hundred insults and just when Shishupal crossed his limit, then Krishna Sudarshan Chakra stroke of his head from his body.
After Sudarshan Chakra was released Krishna was also left with a bleeding finger and Draupadi to a piece from her saree and tied it to Krishna’s wrist to stop the flow of blood test by the gesture by seeing the love towards Draupadi, Krishna promised to repay the debt to her so during the Vastraharan/Cheerharan Draupati husband remained seated she was destroyed in front of everyone.
It is believed Lord Krishna came to her rescue with his blessings, Draupadi’s cloth becomes endless and she couldn’t be disrobed after Lord Krishna has been with Draupadi like a shadow protecting her from every situation.
THE NEXT STORY IS ABOUT THE BROTHER-SISTER RELATIONSHIP OF YAMRAJ(YAMA) AND YAMUNA (THE RIVER)
2. YAMA and YAMUNA
According to the Rigved, Yamuna(the river) is the twin sister of Yamraj.  Yamraj the Hindu mythological God of death is said the tradition of celebrating Raksha Bandhan was started by Yamuna and Yamraj. Old Hindu text reveals that the Yamuna tied a rakhi to Yamraj and does make him an ” Immortal “.
Yamraj is moved by her sister’s affection then he decided whoever gets a rakhi tod from his sister will be blessed to live a long life that’s why whoever ties the sacred thread or cloth to their brother, then brother will protect them till death.
That’s why RAKSHA BANDHAN is Celebrated. 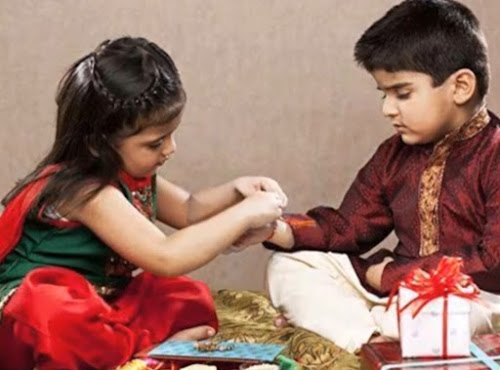 I WISH THIS RAKSHA BANDHAN BRINGS A STRONG BOND AND LOVE BETWEEN BROTHER AND SISTER.
Raksha Bandhan