Jaya Bachchan prescribed comments made by Kangana, where she compared the film industry to a “gutter”.
On the other side, in response Kangana tweeted, ‘ Jaya Ji would you say the same thing if in my place it was your daughter Shweta beaten, drum and molested as a teenager, would you say the same thing is Abhishek complaint about bullying and harassment constantly and found hanging one day? Show compassion for us also’. 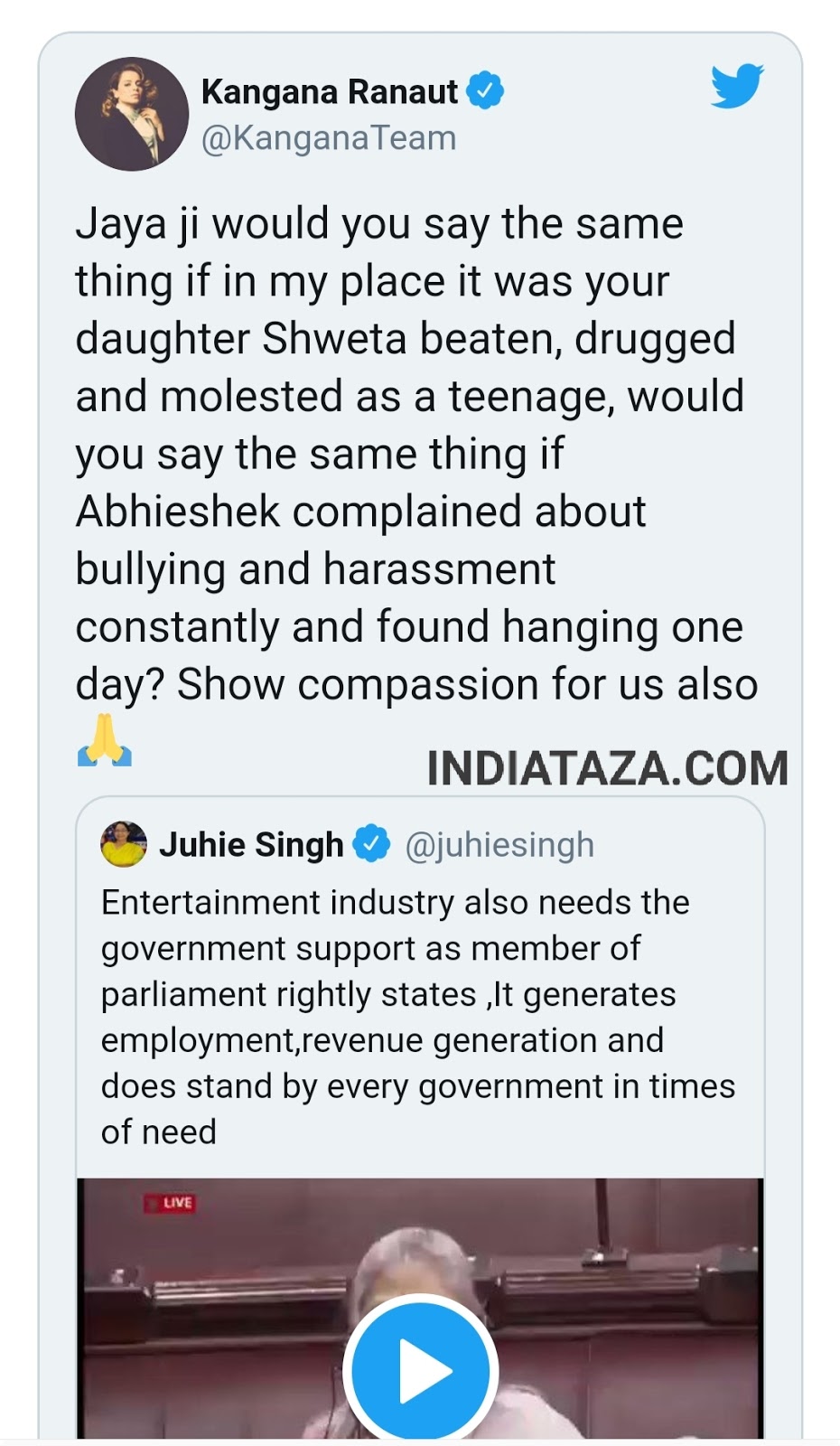 To defame the film industry, Jaya Bachchan sends on the second day of the session in parliament, ‘People in the entertainment industry are being flogged by social media.
She added people who made their names in the industry have called it a gutter with this she completely disagrees. She said that she hopes that the government tells such people not to use this kind of language’.
Jaya set so because earlier Kangana had called the film industry a gutter and alleged that 99% of the people who work in it have been exposed to drugs.

On Twitter, replying to a user who pointed out that the film industry employees, not just an actor or directors, but also technicians and many more Kangana wrote. Just like a famous choreographer once said,’ Rape Kiya to kya Hua roti to dye na (So what if you are violated, at least you got paid for that)’. In these industries there are no proper HR departments in production houses where women can complain and there are no safety or insurances for those who read a life every day, no 8 hours shift regulations.
She added that in addition to money, many employees also deserve respect for their work. She said that paying someone for their service is enough and needs to change while adding she has compiled a full list of reformers I want from the Centre government for workers and junior artists.
Jaya Bachchan also expressed a shop at Ravi Kishan’s remarks. Just because for some people, you can’t tarnish the image of the entire industry. In the Lok Sabha, one of our members from the film industry spoke yesterday after giving a speech against it. It so shames she said.
Ravi Kishan responded to Jaya Bachchan’s comment and said that he is surprised that she didn’t support his Stance. He set that he expected Jaya Bachchan to support what he said, ‘Not everyone in the industry consumes drugs but those who do our part of a plan to finish the world’s largest film industry.
When Jaya Ji and I joined, the situation was not like this but now we need to protect the industry.
jaya bachan Kangana Ranaut Kangana Ranaut and Jaya bachan